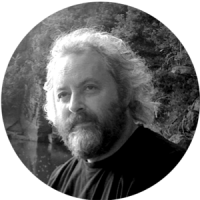 After graduating from Manchester Art College with a postgraduate qualification Sculpture, Bryan went on to work as an artist, designer and maker all over the world. He has created aluminium angels, a submarine rising through a gallery floor, a giant head in a shed, a mind-reading donkey and lots more.

As well as devising, designing and building visual elements for performance and exhibition, Bryan creates public sculpture and works with community groups. After successfully creating and directing the welcoming parade designed to introduce the incoming Grand Duke of Luxembourg to the Canton of Wiltz, he was invited to direct with Cooperations ASBL an evening garden celebration ‘Visions of Paradise’ in the same city. This event was made to celebrate the horticultural elements in Luxembourg’s European Capital of Culture year and was only originally intended to be for one night. The city recommissioned the event the following year and was renamed ‘Nuit des Lampion’and is now in its thirteenth year. In Trier Germany he directed and established a sister festival for ‘Nuit des Lampion’ called ‘Lichter Garten Fest’, to promote cultural cross border colaboration. Bryan is the co-founder and directer of Sowerby Bridge, West Yorkshire ‘Winterlight’ festival, now in its eighth year. 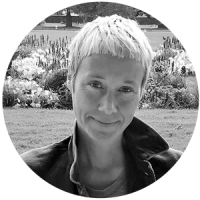 Katrin Vierkant is visual artist and designer based in Paris.

As a curator of creative workshops she works through a vast range of media, which include: drawing, painting, printmaking, sculpture, installation, filmmaking, animation and photography.

Her role in collaborative education and community-based projects is focused on bringing out creativity and provide the highest quality on and relaxed arts experience to its members.

Katrin has a full comprehensive experience working in the arts, community and health sector for over 20 years.

As a visual artist her goal is to help people build better and more meaningful concepts and events. Her work ranges from strategic planning and concept making to creating a strong visual language which increases the value of both: the people and the project, the meaning and the visual quality.